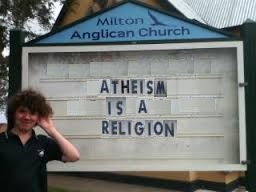 One of the definitions of religion is
“a pursuit or interest to which someone ascribes supreme importance.”
“consumerism is the new religion”
To some overly zealous sports fans,
football is a religion.
Many atheists will say
atheism is a religion like
not playing football is a sport,
not collecting stamps is a hobby,
or
abstinence is a sex postion
but the problem with that is there are
thousands of meetups for atheism but none for
not playing football, not collecting stamps, or abstinence.
Even though the definition of atheism is
“not a theist”
its usage is more like a worldview, identity or area of keen interest.
Even though Neil deGrasse Tyson is technically an atheist
he does not dwell on atheism
and thus does not identify as one.

The main definition of religion is
“the belief in and worship of a superhuman controlling power,
especially a personal God or gods.”
which is more than just a pursuit or hobby.
The word has connotations of a god or a place/act of worship.
Christianity, Islam, and Judaism are popular religions.
Atheism does not involve a god or a place of worship.

Why Do Theists Call Atheism a Religion

Clickbait or provocation is a popular reason for using the word religion.
By calling atheism a religion, they are implying that atheism
has a lot of the properties of religions such as
faith, dogma or intolerance.
They want atheism to look like a religion.

Does It Really Matter

Pick your battles.
If time is spent on a small issue such as a definition then
big battles such as human rights, evolution and the age of earth get diminished.
Whether atheism is a religion or not is a hair-splitting argument
that is not important and shows a level of over sensitivity.
Don’t take the bait, move on.